Northridge Friends Church hosted this quiz season’s final tournament on Saturday, April 27.  We had 14 teams competing over Luke 1-12. There were several close matches and the competition was fierce.  Bethel Blue came out on top in 1st place, Haviland Blue came in 2nd, 3rd place went to Fowler Blue and Haviland Red finished in 4th place.  The other teams finished as follows:
5th–Bethel Red, Argonia Blue
6th–Northridge Red, Fowler Red
7th–Haviland White, Northridge Blue
8th–Argonia Red, Tribe of Friends
Honorable Mention–Chandler, Hutchinson
In addition to the regular awards, the finals include some special recognitions.  All star awards go to the 4 quizzers with the highest average scores over their 3 best tournaments during the season.  The year’s All Stars are Katya Wolters (Bethel) with an average score of 141 points, Maya Jones (Argonia) with an average score of 118 points, Carissa Sohm (Bethel) with an average of 107 points, and Ian Corliss(Tribe of Friends) with an average of 106 points.  Congratulations to these All Star Quizzers.
Finally, we award the Frazier Award to one quizzer who has exemplified excellence in quizzing, sportmanship, and Christian witness.  The year, these students were nominated:
This year’s winner of the Frazier Award was Elizabeth Sneed. Congratulations, Elizabeth ! 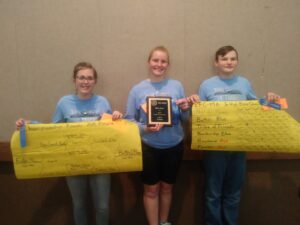 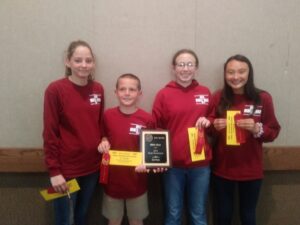 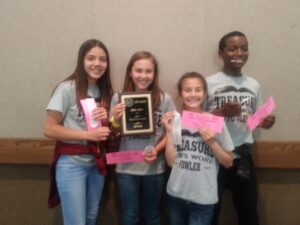 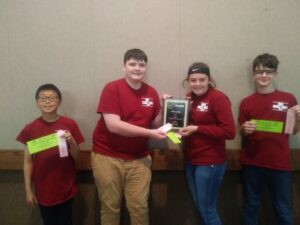