Greetings in the mighty name of Jesus!

My name is Lazarus John, and this is my story.

When I was 17 years old, I was employed by the Sudanese government and attended church services regularly. During that time, the persecution of the church increased. That’s when I heard the voice of the Lord Jesus Christ. He told me to leave the government position and serve the church full-time. After much prayer and study of the Word, I left my government job and began to serve the church. I have no regrets. 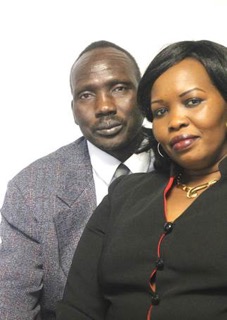 When the Sudanese government saw our church growing stronger, they sent military forces, attacked us, and killed our senior pastor. The church disbanded for several months; however, a church-leadership meeting was called and I was asked to serve as senior pastor. God led me to accept the position even though intense persecution continued.

When the church re-assembled, the disciples multiplied and we became even stronger. Once again, the soldiers attacked the church. They killed my uncle and three elders, and the soldiers threatened to kill me if I continued to preach the gospel. I replied, “I will never stop spreading the Word of my Lord Jesus Christ. If you kill me, I will go to my home in heaven.” Although the persecution continued, the church flourished and many more people came to Christ. But the government’s soldiers came and attacked the church again. This time the building was destroyed, and members of the congregation who survived the attack fled into the countryside.

My parents agreed that the Lord was leading me to leave Sudan to prepare for Christian ministry so I could return home and plant churches. But the persecution escalated quickly, which meant the doors that had been open to study outside Sudan were closing. Nevertheless, I obeyed God’s leading to leave my wife, Veronica, and our family until we could reunite. Since I had become a polio victim as a seven-year-old, I crawled on my hands and knees to escape the persecution. I eventually left Sudan in 1982. After a series of moves from one place to another, the US government accepted me in 1998. I was finally allowed to bring my wife and children to the US in 2000. They joined me in Omaha, Nebraska, and we are all US citizens today.

I met Rev. Randy Littlefield in 2005, and in 2007 Randy and I traveled to Sudan for a fact-finding mission. We learned that the church in Sudan was still reproducing leaders who were planting evangelical churches, which was very encouraging. My relationship with Randy Littlefield eventually led to our Sudanese church in Omaha becoming affiliated with Evangelical Friends Church-Mid America Yearly Meeting (EFC-MAYM) in 2011.

Over the years I have been in conversations with EFM leadership because EFM’s Luke 10 Project is focused on discerning where Friends might start new mission fields. I also spent time with the “Luke 10 Think Tank” at the board meetings, and we discussed how EFM could be connected to the work in South Sudan. In May of 2014 I participated in the Luke 10 trip to Ethiopia to meet with these Sudanese and Rwandan leaders: John Paul Nsekanabo, Nicodeme Basebya, and Brad Carpenter.

The Nebraska Sudanese Community Church of EFC-MAYM has been supporting the Friends churches in South Sudan and Ethiopia, but our finances are limited. I hope to return to South Sudan and Ethiopia in August for two months, and I am praying that my travel expenses of approximately $10,000 will be raised through EFM supporters. My schedule for these two months will be quite intense, and will involve several domestic flights within South Sudan in order to visit various leaders and worship groups. Will you donate to help cover these expenses?

This is the purpose of my trip:

I know God will bless you as you consider assisting me in my travels to South Sudan and Ethiopia, and may he continue to honor your generosity to the ministry of EFM.

P.S. All tax-deductible donations should be made out to Evangelical Friends Mission. Please complete the enclosed response form by June 10, and send your reply to: