I was looking through my dresser drawers the other day and I came to a startling realization: I have way too many t-shirts. The problem is that I really like t-shirts, and I find it surprisingly difficult to part with them. After all, t-shirts are readily available, relatively inexpensive and extremely comfortable. They can be easily re-purposed as rags, quilts, pet bedding or painting attire. They also make great souvenirs and serve as portable billboards for your favorite people, places, teams and causes.

The most recent addition to my t-shirt collection is one of my very favorites so far. It’s a trekking t-shirt that features a solitary hiker and a solitary tree framed by the following caption: “Not All Who Wander Are Lost.” This caption is actually a portion of a short poem written by Bilbo Baggins, the main protagonist in The Hobbit and a primary character in the Lord of the Rings trilogy by J.R.R. Tolkien. The poem presents an encrypted description of Aragorn, an heir to the royal throne who is currently wandering throughout the land as a vagabond ranger known as Strider. The poem is used to help convince Bilbo’s nephew, Frodo, to trust Aragorn even in his Strider guise. Aragorn later recites the first two lines when he is attempting to get Frodo to trust him enough to join him on his journey. 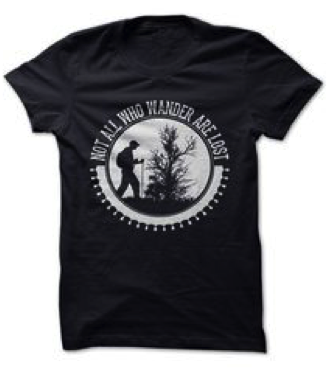 For those who may not be familiar with these fanciful tales of Middle Earth, it may be helpful to note that Tolkien, a devout Christian, created them to serve as allegorical representations of Christ’s kingdom here on earth. As such, Aragorn (and to varying degrees, Gandalf and Frodo) embodies much of the character of Christ. Not only does he wander in the wilderness before revealing his true identity as the chosen one, but through multiple acts of sacrificial love on behalf of his friends, Aragorn helps to save all of Middle Earth from the demonic sway of Sauron and his dark forces of evil. Sound familiar?

As I reflect upon my first three years of ministry as general superintendent for EFC-MAYM, there have been many days when it seems as though Mid America bears an uncanny resemblance to Middle Earth. To be honest, I have frequently felt a bit like Frodo, just a little Hobbit from the Shire. One day he is minding his own business and enjoying a relatively simple life with his friends and neighbors, and the next thing you know he is suddenly summoned to fulfill a new and unsolicited mission, one that is way above his pay grade, in response to the call of a great and godly king who, like Aragorn, typically appears in the distressing disguise of a vagabond ranger who is relentless in his determination to free the entire land from its captivity to the dark forces of this fallen world.

While there are those rare times now and then when the king chooses to reveal his true identity in all of its splendor, more often than not, his character is made manifest most clearly in the midst of the seemingly mundane, messy, every day, ordinary events of human life. And every life has a story to tell.

Far from fanciful tales, the stories we have to tell here in EFC-MAYM are about very real people from very real places who find themselves fighting all-too-real battles. Having visited all of our churches (including multiple visits to many churches) during my extensive travels across Mid-America over the past three years, I can speak from firsthand experience when I say that we are all just a bunch of ordinary Hobbits after all, an equally flawed yet remarkably resilient family of Friends, representing a wide variety of racial, ethnic, religious, geographic, linguistic and cultural backgrounds, and we all share a common condition:

As we gather for the 146th sessions of EFC-MAYM this month in Haviland, we will pay special attention to the Israelite’s long, arduous, transformational journey through the wilderness on their way to the promised land. We can learn much from those fellow sojourners who have walked before us on this trail of faith (cf. Heb 11), but if we have any hope of completing the journey ourselves, we must “fix our eyes on Jesus, the pioneer [trail blazer] and perfecter [trail guide] of our faith” (Heb 12:2), for he is our one and only reliable Way in the wilderness. Over time, as we learn to follow him even more faithfully, we find our lives slowly, surely and increasingly reoriented as we wander together along this truly transformational journey with Jesus, our vagabond King. And it isn’t long until we come to the very same conclusion as J.R.R. Tolkien and every other faithful friend and fellow traveling companion who has gone before us:

“Not all who wander are lost.”