As I write these words, I am gazing at a one of my favorite images. It is a photograph I took a few years ago while hiking around Sprague Lake, a pristine mountain oasis located at the south end of Rocky Mountain National Park. At the center of this picture there is an alpine lake, surrounded by a vast forest of Douglas fir and Ponderosa pine. Enthroned in the background are the majestic, snow-capped summits that preside over this portion of the Continental Divide: Flattop, Thatchtop, Chief’s Head, Long’s Peak. In the foreground, at the bottom of the photograph, there is an empty bench made of rough, hand-hewn timber that has my name on it, or so it would seem. As naturalist John Muir was known to say, “The mountains are calling and I must go.”

As an avid hiker and nature lover, this image continually reminds me to give thanks for the breath-taking beauty I have been privileged to behold, while stirring within me a fresh hunger for exploring the multitude of new destinations that are just waiting to be discovered. More importantly, as a disciple of Jesus Christ, the empty bench serves as a regular reminder that our risen Lord is inviting me to recognize his presence, to engage him in conversation, to join him on the journey, and to allow him to be the strength of my life at every point along the way: “I lift my eyes to the mountains – where does my help come from? My help comes from the Lord, the Maker of heaven and earth” (Ps 121:1). 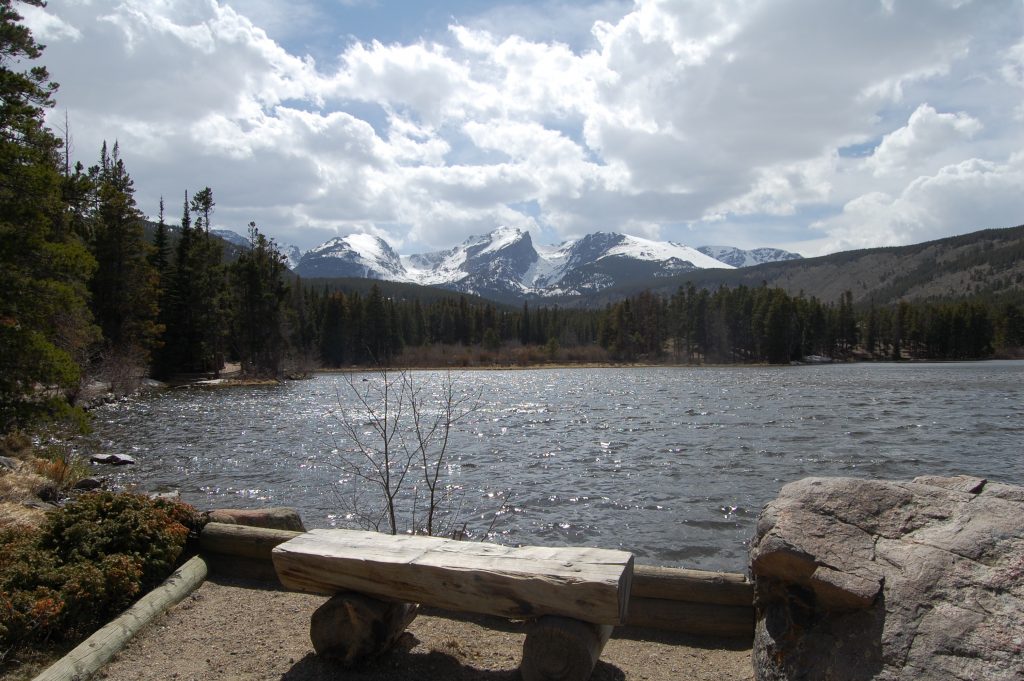 This is easier said than done, of course. Like everyone else, there are an endless number of competing voices pulling at me from every direction from morning to night, both internally and externally. And I want very much to respond to them, to please them, or to appease them, at the very least. I want to have a sense that I am valued, appreciated, affirmed, loved.

But among the many capricious voices clamoring for my attention, there is but one Voice that has the ability to satisfy the deepest longings of my heart. Augustine was right: “Our hearts are restless until they rest in You, O Lord.” At the end of the day, whether we realize it or not, we ultimately live, move and have our being before an Audience of One.

This became unusually clear to me seventeen years ago during my first weeks on the job as a professor at Barclay College here in Haviland. I moved to the sunflower state by myself in August of 2000, leaving my wife and six children in Ohio, waiting for our house to sell. Although I was extremely excited to begin my new adventure on the college campus, I was less than thrilled to do it by myself. I was the new kid on the block, living alone in an empty house, occasionally feeling like I was stranded on a desert island in the middle of a tiny, remote village in the middle of … somewhere.

“It” was an empty chair. Except that it wasn’t empty at all. The Lord was gently reminding me that what appeared to be an empty chair was, in a very real sense, continually occupied by the One who promised to be with me “always, to the very end of the age” (Mt 28:20). He was with me when I laid my head on the pillow each night, when I got into the car each morning, when I took my seat on the plane, and when I sat down to work on each and every course syllabus. He was with me, and He wasn’t going anywhere. He was just hoping that I would notice.

As this simple reality began to sink in, the Lord began to transform my loneliness into a whole new appreciation for solitude. It wasn’t long before the silence became increasingly welcomed as a personal invitation to engage in intimate, uninterrupted conversation and ongoing companionship with Christ. As Paul Tillich has said, “Loneliness is a word to describe the pain of being alone; solitude is a word to describe the glory of being alone.”

In time, the house in Ohio sold and my family was finally able to join me in Kansas. As thankful as I was to have them all with me, I have to confess that I was somewhat disappointed at first to discover that it was suddenly much harder to find an empty chair!

The lesson was not wasted, however. I am continuing to benefit from the discipline of the empty chair. To this day, when I find an empty chair next to me along the way, I am regularly reminded that it is not empty at all. The Lord is with me, and he’s not going anywhere. He is my constant Companion and Friend. He is just waiting for me to acknowledge his presence, to engage him in conversation, and to join him on the journey. And when I do, my spirit sings for joy: “And he walks with me, and he talks with me, and he tells me I am his own. And the joy we share as we tarry there, none other has ever known” (see “In the Garden” by C. Austin Miles).

May our Lord Jesus continue to bless you and keep you, dear friends, and may you experience great joy on your journey as you embrace his presence in your midst!